The Best Land Under Heaven: The Donner Party in the Age of Manifest Destiny (Hardcover) 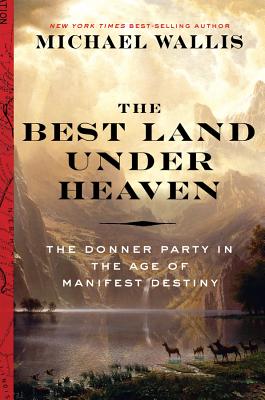 Named “Best Book of 2017” by the Wild West History Association


"WESTWARD HO! FOR OREGON AND CALIFORNIA!"

In the eerily warm spring of 1846, George Donner placed this advertisement in a local newspaper as he and a restless caravan prepared for what they hoped would be the most rewarding journey of a lifetime. But in eagerly pursuing what would a century later become known as the "American dream," this optimistic-yet-motley crew of emigrants was met with a chilling nightmare; in the following months, their jingoistic excitement would be replaced by desperate cries for help that would fall silent in the deadly snow-covered mountains of the Sierra Nevada.

We know these early pioneers as the Donner Party, a name that has elicited horror since the late 1840s. Now, celebrated historian Michael Wallis—beloved for his myth-busting portraits of legendary American figures—continues his life’s work of parsing fact from fiction to tell the true story of one of the most embroidered sagas in Western history.

Wallis begins the story in 1846, a momentous "year of decision" for the nation, when incredible territorial strides were being made in Texas, New Mexico, and California. Against this dramatic backdrop, an unlikely band of travelers appeared, stratified in age, wealth, education and ethnicity. At the forefront were the Donners: brothers George and Jacob, true sons of the soil determined to tame the wild land of California; and the Reeds, headed by adventurous, business-savvy patriarch James. In total, the Donner-Reed group would reach eighty-seven men, women, and children, and though personal motives varied—bachelors thirsting for adventure, parents wanting greater futures for their children—everyone was linked by the same unwavering belief that California was theirs for the taking.

Skeptical of previous accounts of how the group ended up in peril, Wallis has spent years retracing its ill-fated journey, uncovering hundreds of new documents that illuminate how a combination of greed, backbiting, and recklessness led the group to become hopelessly snowbound at the infamous Donner Pass in present-day California. Climaxing with the grim stories of how the party’s paltry rations soon gave way to unimaginable hunger, Wallis not only details the cannibalism that has in perpetuity haunted their legacy but also the heroic rescue parties that managed to reach the stranded, only to discover that just forty-eight had survived the ordeal.

An unflinching and historically invaluable account of the darkest side of Manifest Destiny, The Best Land Under Heaven offers a brilliant, revisionist examination of one of America's most calamitous and sensationalized catastrophes.

Wallis has delved into an extraordinary mass of original material, documents, diaries, accounts and letters, as well as new sources apparently not available to previous authors, and produced not only a definitive account of the Donner tragedy, but also a book so gripping it can scarcely be put down. . . . Wallis has done a superb job sifting through lurid tabloid moralizing and unreliable accounts to explore the complex truths of human beings pushed to the absolute limits of existence.
— Douglas Preston - New York Times Book Review

The saga of the Donner Party is one of the most horrific and fascinating events in the history of the American West. A cautionary tale at the time, it becomes in Michael Wallis’s thorough and persuasive new telling, The Best Land Under Heaven, emblematic of the more shadowy aspects of Manifest Destiny. . . . [A] welcome update of a nightmarish tale.

[An] engaging account of the doomed journey . . . . Mr. Wallis tells the story well and paints interesting portraits of the characters.
— David A. Price - Wall Street Journal

An even-handed, briskly written history of the party, destined to become the standard account of this horrid chapter of American history.
— Timothy R. Smith - Washington Post

If you want the full, unvarnished, exceptionally researched and documented, day-by-day description of what happened, look no further . . . [Wallis] provides a study of the times and circumstances and pioneer mindset that it took for farmers and businessmen to decide to sell off their property, pack up their families and set off in search of something better beyond the next hill, over the horizon, past where the sun was last seen setting. . . . Fascinating, and horrifying, and inspiring.
— Glen Seeber - The Oklahoman

Wallis
offers a vivid new look at the ill-fated Donner Party . . . . Wallis’s use of
primary sources, together with his dynamic writing style, turns a familiar
retelling into a real page-turner. A welcome addition to all history
collections.
— Patricia Ann Owens - Library Journal, starred review

Best-selling Wallis’ (David Crockett, 2011) account of their tragic and thoroughly avoidable trek is well-researched, detailed, and well-written. . . . Wallis recounts their bad decisions and sufferings as well as the heroic efforts to rescue them with sympathy and eloquence while placing them within the broader context of the pursuit of the ‘Manifest Destiny’ to expand across the continent. This is an excellent reexamination of an infamous saga.

Nobody tells the stories of American history better than Michael Wallis. He’s done it again with this superbly researched and written account of the Donner Party trip west toward glory and riches that ended in bizarre catastrophe. The Best Land Under Heaven will clarify the facts of that infamous event as well as captivate and entertain. There are few better reads than this.

Michael Wallis has outdone himself in The Best Land Under Heaven by revisiting the sad wanderings of the doomed Donner Party. In elegant prose, Wallis reveals how the death song of Manifest Destiny had lured so many to irretrievably, and often tragically, alter not only the course of their own lives but that of America, too.

Mr. Wallis has succeeded for the first time in compiling all available pertinent historical facts into this book. It is a must-have for everyone wanting the true story of the most epic saga of survival during the westward movement.
— William A. "Bill" Springer, Great grandson of Captain George Donner and the Curator of the Donner-Springer Family Collection

You cannot understand the settlement of the American West without understanding the facts and—tellingly—the myths of the tragic Donner Party of 1846. Michael Wallis has done a superb job sifting through the grumblings, resentments, and fatal delays of the wagon train that came to symbolize both the folly and grit of our westward expansion. Once I started, I could not put this account down.
— Rinker Buck, best-selling author of The Oregon Trail: A New American Journey and Flight of Passage