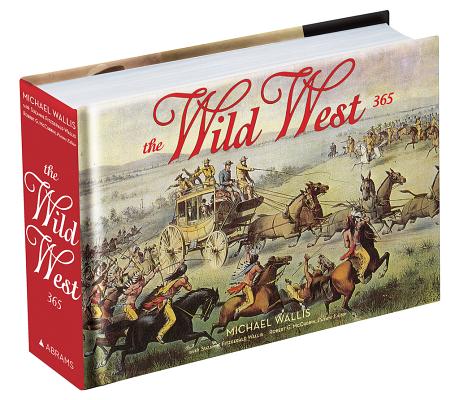 By Michael Wallis, Robert McCubbin (Other primary creator)
Email or call for price.
Out of Print

The Wild West: 365 Days is a day-by-day adventure that tells the stories of pioneers and cowboys, gold rushes and saloon shoot-outs in America's frontier. The lure of land rich in minerals, fertile for farming, and plentiful with buffalo bred an all-out obsession with heading westward. The Wild West: 365 Days takes the reader back to these booming frontier towns that became the stuff of American legend, breeding characters such as Butch Cassidy and Jesse James. Author Michael Wallis spins a colorful narrative, separating myth from fact, in 365 vignettes. The reader will learn the stories of Davy Crockett, Wild Bill Hickok, and Annie Oakley; travel to the O.K. Corral and Dodge City; ride with the Pony Express; and witness the invention of the Colt revolver. The images are drawn from Robert G. McCubbin's extensive collection of Western memorabilia, encompassing rare books, photographs, ephemera, and artifacts, including Billy the Kid's knife.

Michael Wallis is the author of many books on the West, including Billy the Kid and The Real Wild West. He has written 16 books and won numerous honors and awards.

Robert G. McCubbin is one of the founders of the Wild West History Association and the country's premier collector of American West photographs and books.