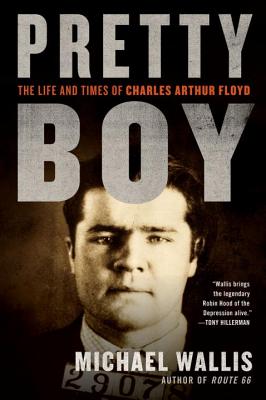 "This engaging biography exactly and vividly catches the tone of a region, a time, and a man."—Larry McMurtry

From the best-selling author of Billy the Kid and Route 66, a true-life story of a notorious outlaw that magnificently re-creates the vanished, impoverished world of Dust Bowl America. Michael Wallis evokes the hard times of the era as he follows the life of Charles "Pretty Boy" Floyd from his coming of age, when there were no jobs and no food, to his descent into a life of petty crime, bootlegging, murder, and prison. Before long he was one of the FBI's original "public enemies." After a series of spectacular bank robberies he was slain in an Ohio field in 1934 at the age of thirty. Pretty Boy is social history at its best, portraying, with a sweeping style, the larger story of the hardscrabble farmers whose lives were so intolerably shattered by the Depression.

Wallis brings the legendary Robin Hood of the Great Depression alive—and he proves to be a fascinating fellow.
— Tony Hillerman