David Crockett: The Lion of the West (Hardcover) 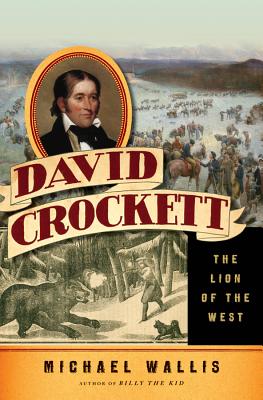 His name was David Crockett. He never signed his name any other way, but popular culture transformed his memory into "Davy Crockett," and Hollywood gave him a raccoon hat he hardly ever wore. Best-selling historian Michael Wallis casts a fresh look at the frontiersman, storyteller, and politician behind these legendary stories. Born into a humble Tennessee family in 1786, Crockett never "killed him a b'ar" when he was only three. But he did cut a huge swath across early-nineteenth-century America—as a bear hunter, a frontier explorer, a soldier serving under Andrew Jackson, an unlikely congressman, and, finally, a martyr in his now-controversial death at the Alamo. Wallis's David Crockett is more than a riveting story. It is a revelatory, authoritative biography that separates fact from fiction, providing us with an extraordinary evocation of a true American hero and the rough-and-tumble times in which he lived.