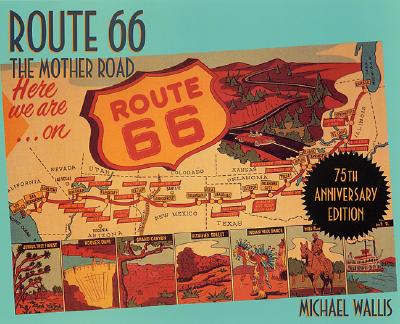 For 75 years, Route 66 has been the highway of dreams. It began in the early 1920s with a vision of a paved highway that would connect Chicago to Los Angeles and the West. By the time of its completion, the road would cover over 2400 miles, three times zones and eight states. More than simply a stretch of pavement, Route 66 embodies a uniquely American state of mind. It's the road of dreamers, ramblers, drifters and writers: John Steinbeck, Jack Kerouac and Woody Guthrie.

First published in 1990, the bestselling Route 66: The Mother Road sparked an unprecendented revival of the forgotten towns, diners, and motels along the route, transforming the road from a nostalgic memory into a vibrant, internationally recognized destination in its own right. For the 75th anniversary edition, Wallis hit the road again and in a new chapter filled with photos revisits the people and places that make Route 66 what it is: an American icon. This new edition of The Mother Road will be an instant classic, delighting old fans and attracting new ones.

Michael Wallis is the award-winning author of" Route 66: The Mother Road, Pretty Boy, Oil Man "and "The Real Wild West" among several others. Born in the 66-town of St. Louis, Wallis now lives in Tulsa, Oaklahoma, a short distance from the Mother Road.